Join Us and Get Involved!
Questions

It is legal to peacefully campaign for independence.

In 2010 both the National Prosecuting Authority (NPA) and the Directorate for Priority Crime Investigations (Hawks) confirmed it was not a crime to pursue secession, declaring that it was a ‘political matter’. In addition to this, the Cape Party have been registered with the Electoral Commission of South Africa (IEC) since 2007, openly campaigning for an independent Cape during which time they have legally contested both national and provincial elections without challenge or incident.

Far too much time, both by the independence movement itself and its detractors, has been devoted to debating the finer points of law, most of it by people with no legal background. Almost all laws are nuanced and dependent upon the prevailing circumstances and Cape independence (secession) is no exception.

There are multiple routes to achieve independence, including international law, constitutional law, the electoral system and political negotiation, but all of them are premised upon the most crucial legal requirement, moral authority obtained by the democratic wishes of the majority.

Ultimately the starting point to obtain independence is 50% +1 of Cape citizens declaring, whether in elections, signed petitions, mandates or verified polling data, that they would rather govern themselves as an independent nation than be governed from Pretoria by a government they never elected.

Once the people of the Cape have democratically expressed their wishes, it will be for the lawyers and the political negotiators to work out the details with the South African government or, in the unlikely event of this institution refusing to respect democracy, via the United Nations as international law dictates.

Is an independent Cape financially viable?

An independent Cape is, without doubt, financially viable.

Cape of Good Hope would instantly be better off. The Western Cape (along with Gauteng) currently subsidises the rest of South Africa and is a net contributor to the national South African fiscus.

Even assuming that the new Cape government is no more efficient that the current South African government, our ‘provincial budget’ would increase by 38% overnight.

This does not factor in that an estimated R1.5trn trillion has been stolen by the South African political elite, R0.2 trillion of which came from the Western Cape, a sum equivalent to our entire economic output for 6 months.

Will it ever happen?

The simple answer to this question is: it will, if we want it to.

Gaining independence (secession) in principle is not a complicated process. Once the majority clearly demonstrate their wish to govern themselves, it simply becomes a matter of working out the details.

Anyone who has discussed the idea of independence will have been confronted with a litany of apparently insurmountable obstacles why it can’t happen. The truth is, WE are the only real obstacle between us and independence.

If we allow others to convince us that it couldn’t or shouldn’t happen and remain silent, independence will remain a dream. If we stand up and claim our right to a better future for us all, independence becomes inevitable.

Will the ANC allow independence?

The major political parties of South Africa have very little to say publicly about independence. For their own reasons, it is a genie they would much rather remain in the bottle because, were that genie ever to get out…

The ANC will certainly not like independence and will likely do all they can to discourage it, but ultimately they cannot and will not prevent it if the people of the Cape have clearly indicated their democratic wish to be independent.

There are several reasons to confidently say this:

The ANC itself is a liberation movement whose entire purpose was to establish government mandated by the democratic majority, a goal they achieved to great global acclaim and largely as a result of almost universal international support. It is almost inconceivable that, in the final reckoning, were the people of the Cape to express their desire to govern themselves, the ANC would defy international law and enforce minority rule – the very thing they fought for a century so publically against.

The ANC strongly supported South Sudan’s recent secession, establishing an uncomfortable precedent for them with regard to Cape independence.

The ANC is a signatory to, and member of, several organisations and their statutes which establish self determination as a right.

The ANC signed an accord on Afrikaner self determination in 1994, which included the right in the constitution, and affirmed the right with the Moosa declaration in 1996.

Taking these things together, it is hard to imagine that even the ANC would be so brazen as to publicly renounce their own words and history, knowing the inevitable backlash it would invoke from the international community. 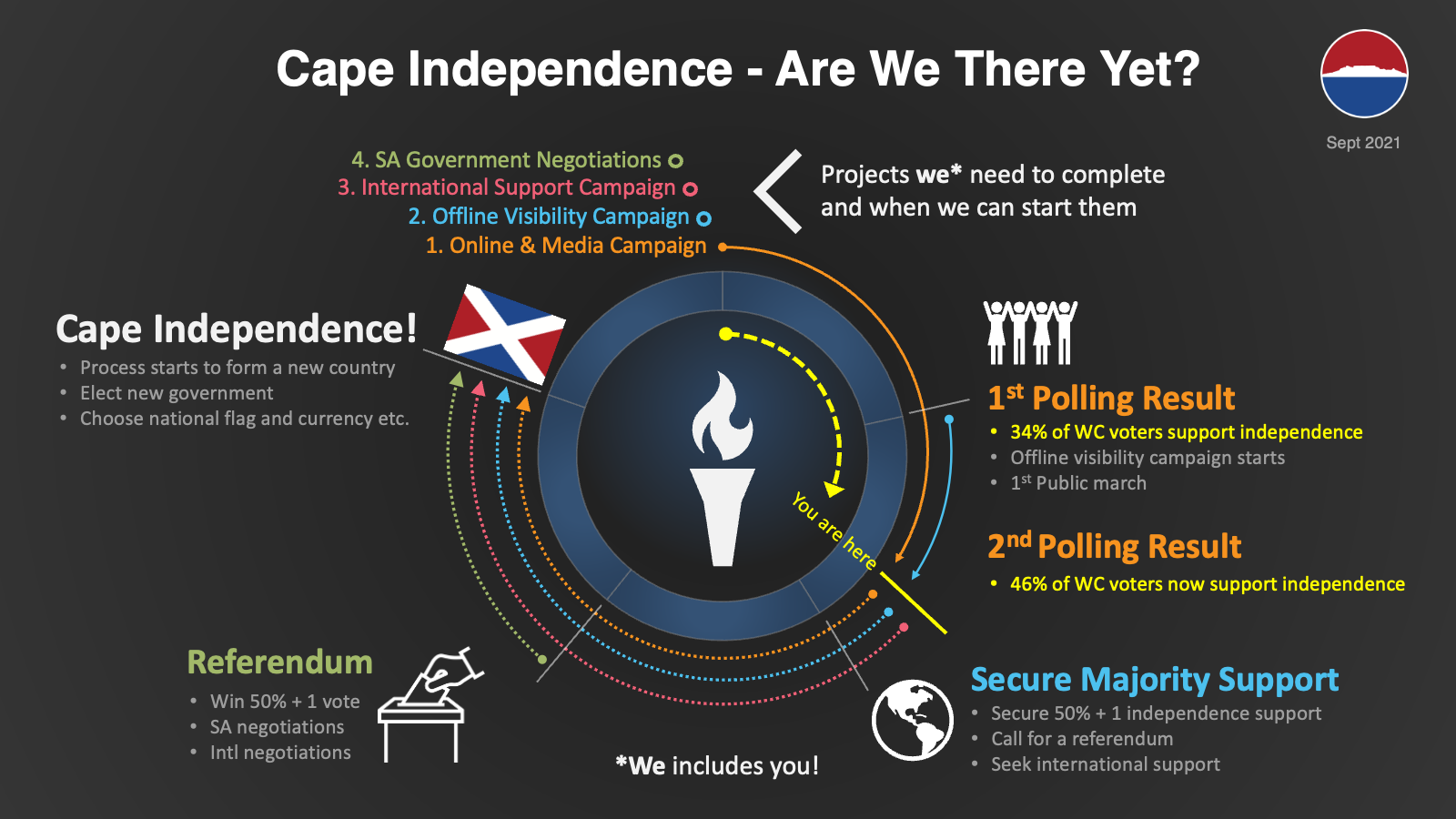 More Questions?
Please talk to us on Twitter if you feel we need to improve some of the answers on this page.

Ask us a Question
Visit our Contact page and get in touch to ask questions, or talk to us on Twitter.